A baby falcon that nests atop the Palace of Culture has been rescued after surviving near certain death following a fall from the 45th floor.

Hawk enthusiasts who monitor the family of predators believed that after four days out of the nest, the young bird named Varso may have succumbed to its injuries or been gobbled up by crows.

However, a miracle happened when a palace clerk noticed Varso on an eighth floor rooftop still alive. 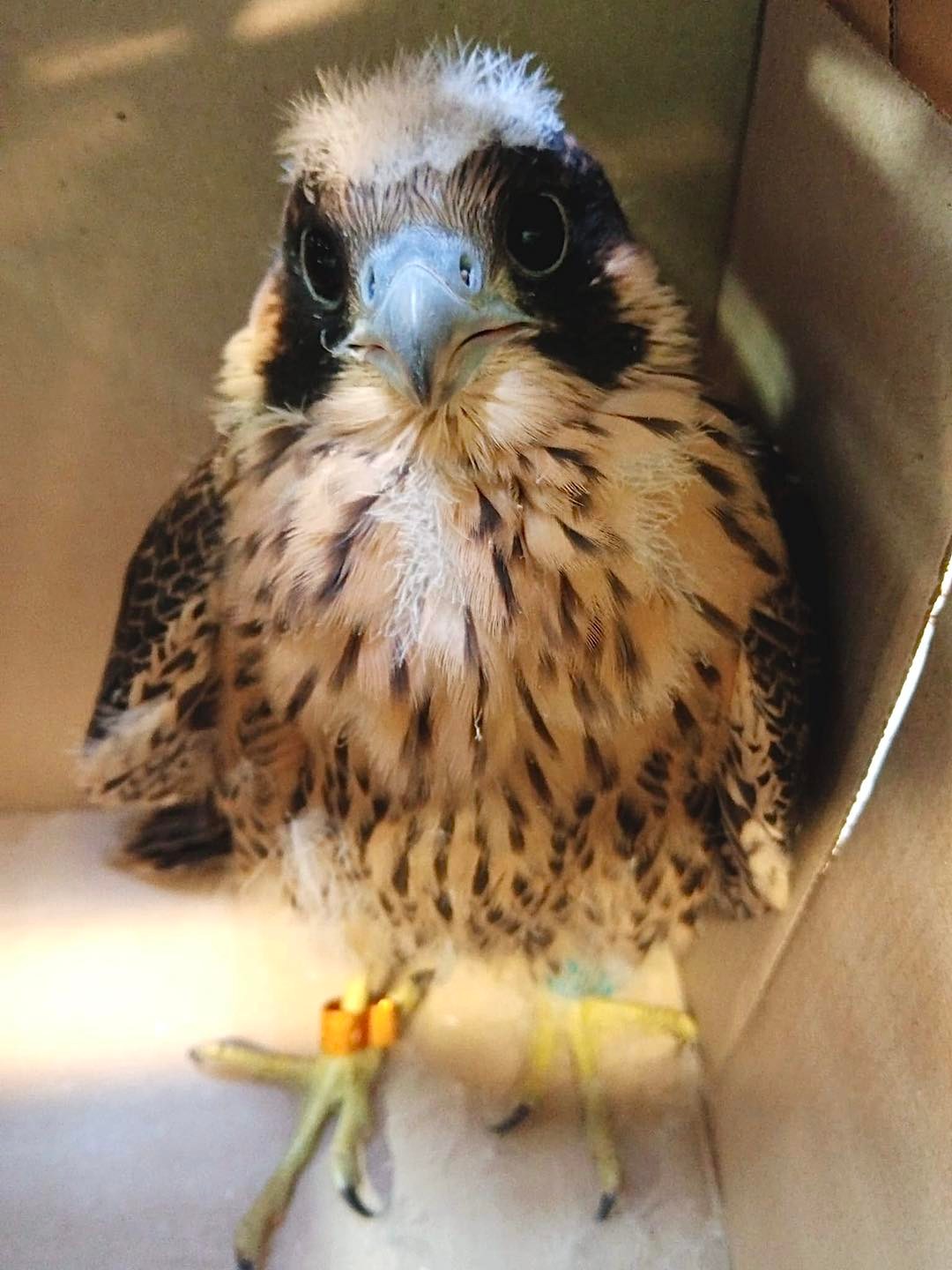 The drama began when Varso took one step too far out of his nest box and fell overboard.Stowarzyszenie na Rzecz Dzikich Zwierząt “Sokół”

Varso, a curious and brave young bird, had already tried several times to leave the nest before his death-defying plunge just over a week ago.

The drama began on May 19, at 8:34 p.m. sharp, when Varso approached the edge of the gutter by his birdhouse just under the spire of the Palace of Culture, took a step too far and fell.

The fall was witnessed by hundreds of horrified falcon enthusiasts, who watch the birds through one of the palace’s six cameras which provide a live feed of the falcon family – mother Giga, father Franek and three brothers and sisters, Varso and his sisters Aria and Iga.

Some of the observers from the FalcoFani Facebook group set out to find Varso. They combed through bushes and parking lots and used telescopes, binoculars and even drones to observe the palace which, unlike the smooth glass skyscrapers that surround it, is full of nooks and crannies where a bird could be trapped. 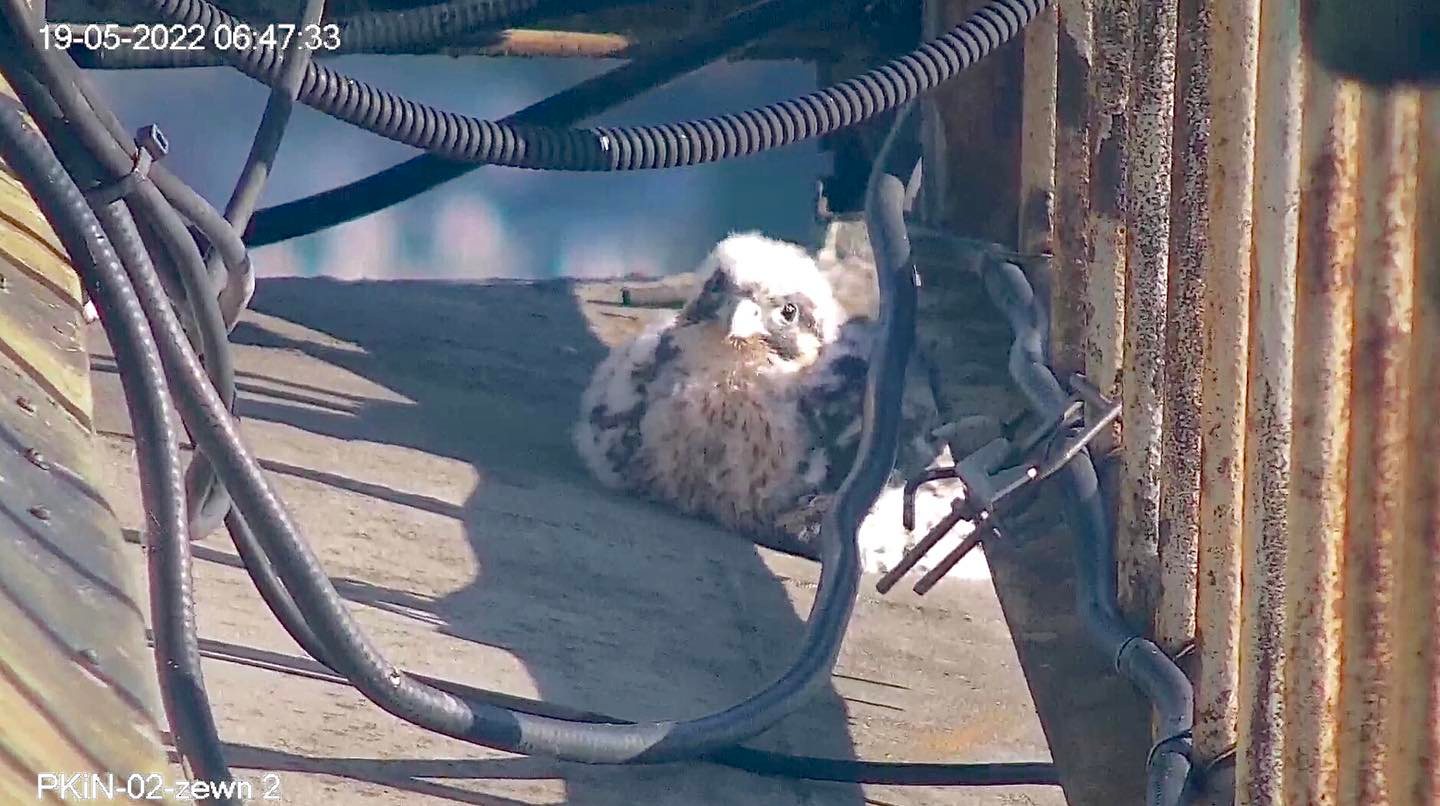 A miracle happened when a palace clerk noticed that Varso was still alive on an eighth-story rooftop.Stowarzyszenie na Rzecz Dzikich Zwierząt “Sokół”

With special access from the palace security guards, they also swept the upper terraces. However, there was no sign of Varso.

One of the members of the group looking for Varso was Jola Saratowicz. She got involved in watching Warsaw falcons online during the pandemic when she was forced to spend a lot of time at home.

She told Polish media: “It was very difficult. He fell from the 45th floor, he couldn’t fly. Everything seemed to indicate that he was lying somewhere broken, crows were eating him, or it was unclear what else could happen to him. 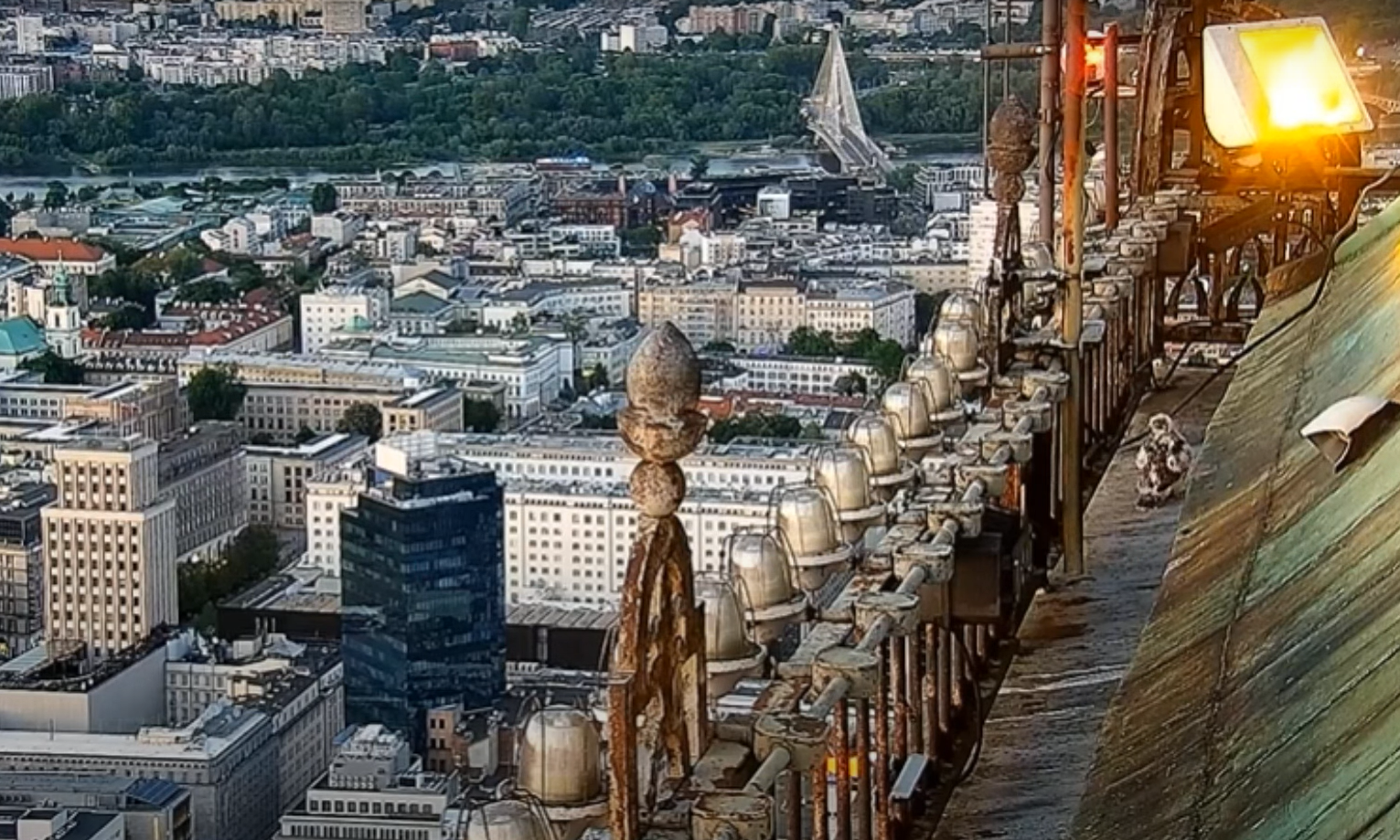 Hawk enthusiasts who monitor the family of predators believed that after four days out of the nest, the young bird named Varso may have succumbed to its injuries or been gobbled up by crows.FalconFani

By Sunday, after four days of intense searching, she and her colleagues had given up hope of finding Varso alive.

And then the miracle happened. On Tuesday, a friend working at the palace sent Saratowicz a photo taken on a smartphone.

“The photo was very blurry. There was a bird on it, […] sitting on the roof of the Palais des Jeunes, on the eighth floor; the photo was taken with a cellphone from the thirteenth floor,” she said.

Saratowicz immediately headed for the palace and after confirming that the bird was indeed Varso by its distinctive plumage, he cautiously exited onto the roof. 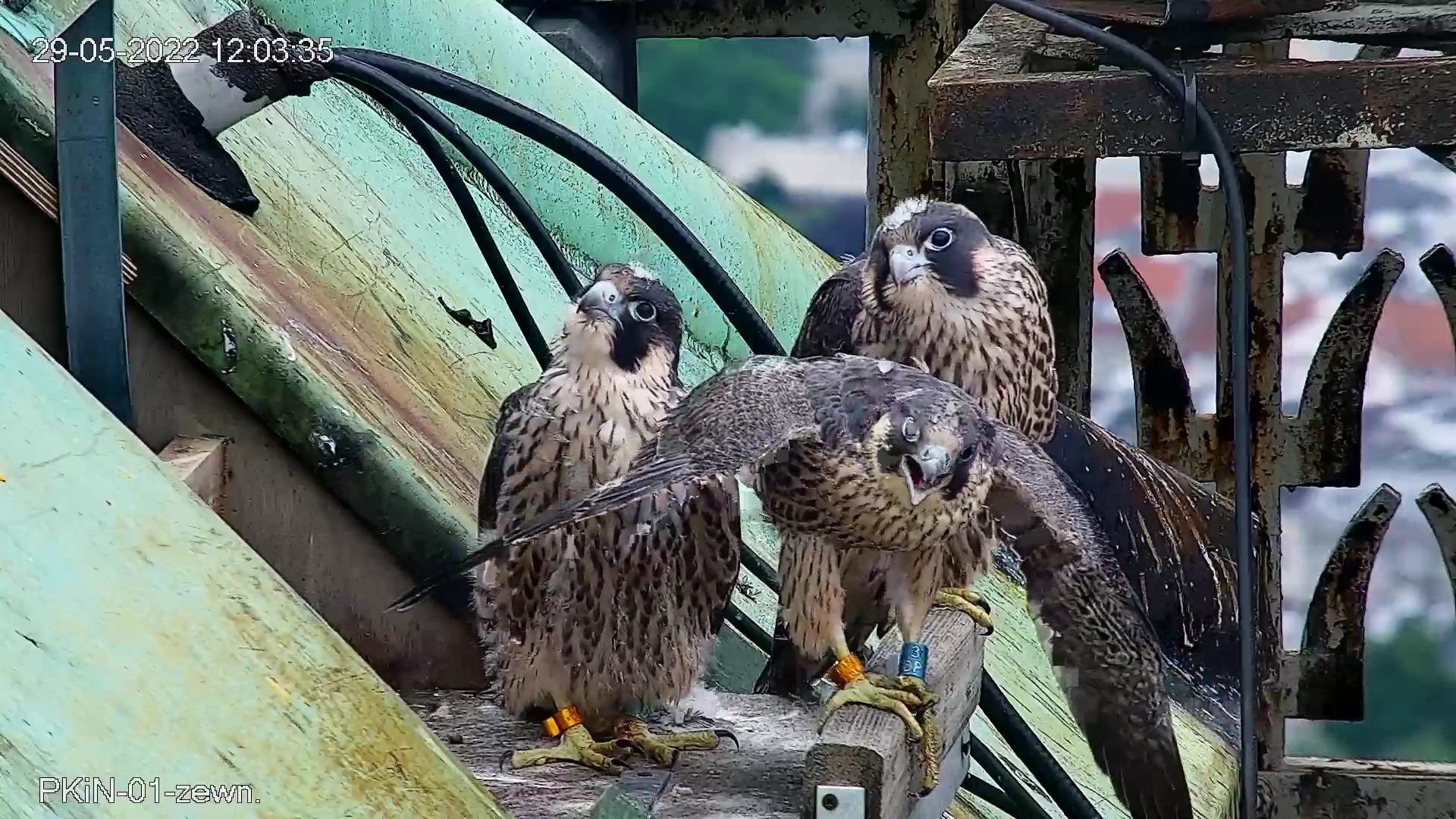 Peregrine falcons are one of the rarest raptors in Poland.FalconFani

Although scared of heights, the roof of the Palace of Youth, an area inside the main palace, is walled off on either side, so Saratowicz felt safe stepping out to the bird.

After a long time chasing the young falcon, she finally managed to catch him.

“In my eyes he was in good shape, but he had to be examined by specialists,” she said. Varso was immediately sent to the Warsaw Zoo Bird Asylum for treatment.

How he ended up on the roof of the Palais des Jeunes is unclear. One theory is that he fell from the 45th floor in stages. 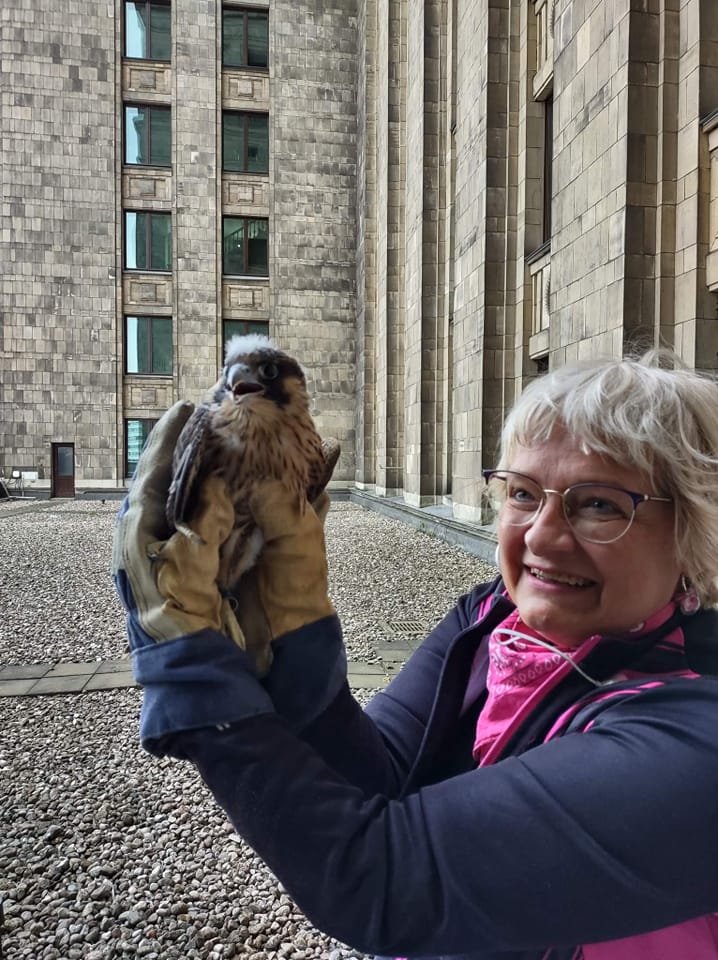 After Varso’s discovery, Jola Saratowicz climbed onto the roof and after a good while chasing the young falcon, finally managed to catch him.FalconFani

Office workers saw him being attacked by crows, but managed to scare them away by throwing rocks.

At the Warsaw Zoo it was discovered that Varso had no serious injuries and after a few days he was reunited with his parents and sisters at the palace, where he is now thriving.

Sławomir Sielicki of the Sokół Society for Wild Animals, who guards the nest at the palace with about 20 others across Poland, pointed out that while it is rare for young falcons to fall from their nests, it was not the first time that Varso had taken such dangerous measures.

Several times the young falcon had sunk into the gutter near its nest, from where it had been rescued by bird lovers. 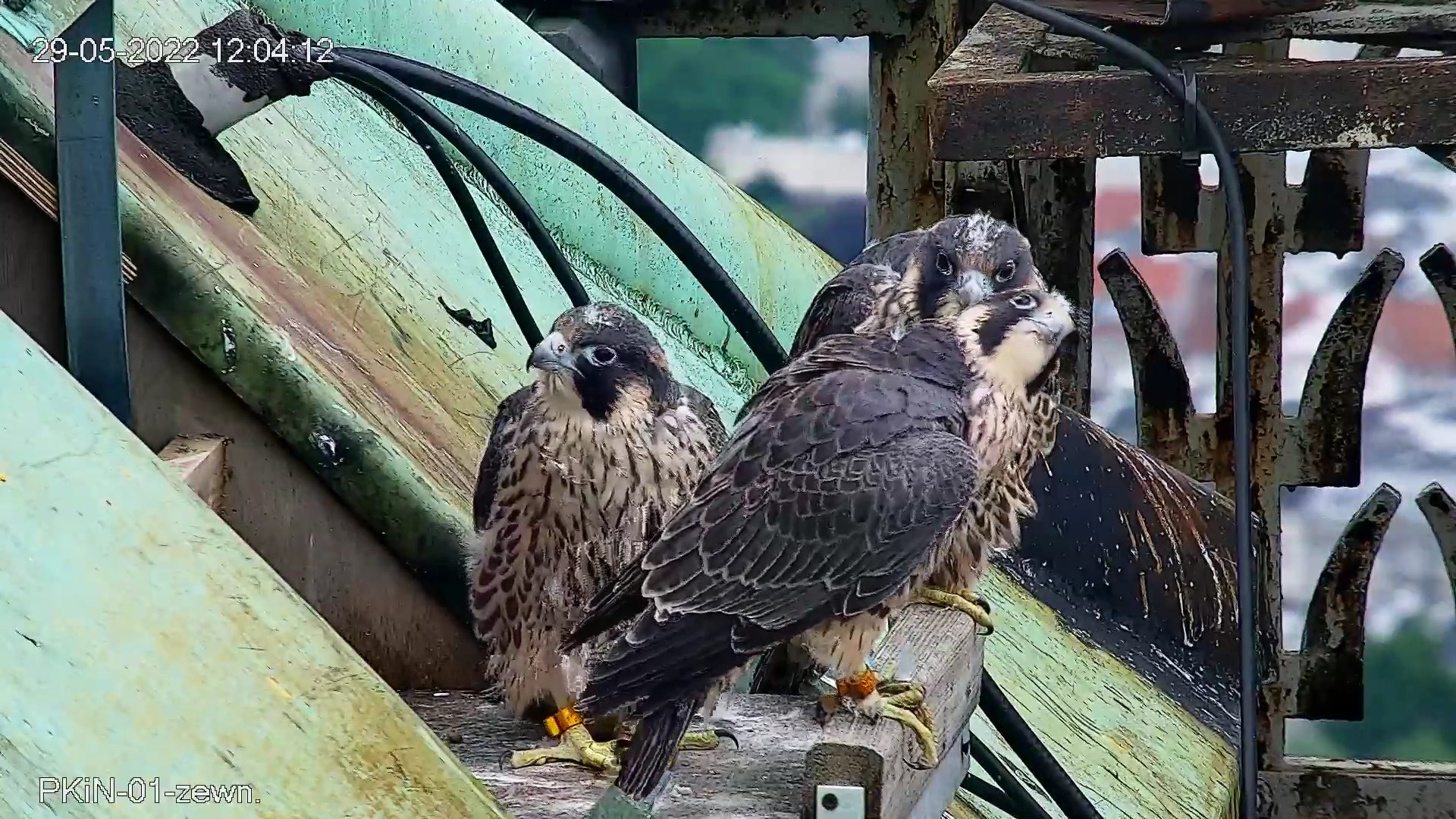 After his week-long ordeal, Varso was finally reunited with his family.FalconFani

“Let’s hope he won’t take any more risks. We secured the nest so he couldn’t leave it. However, we don’t know if Varso will not be tempted by another adventure,” said Sielicki.

Peregrine falcons are one of the rarest raptors in Poland. As the ornithologists of the Sokół Association for Wild Animals explain, at the beginning of the 20th century it was a widespread species throughout the country, although not very numerous. Around 1950, there was a catastrophic drop in population.

The last falcon’s nest in Poland was seen in the mid-1960s, and since then the birds have only been seen sporadically.

Falcons have been living in a nest in the Palace of Culture and Science since 1998 as part of a peregrine falcon reintroduction program.

No comments to show.